I haven’t been able to be around much lately – a combination of trying to finish up projects at work, trying to finish up projects at home, being exhausted, and my computer crashing – and with the imminent arrival of YogaBaby, I’m not sure I’ll be around much for a while. But I thought I’d share some photos marginally related to yoga. Here’s a shot of my baby’s room! A room which is finished, contains no boxes or items unrelated to the baby, and has art on the walls! 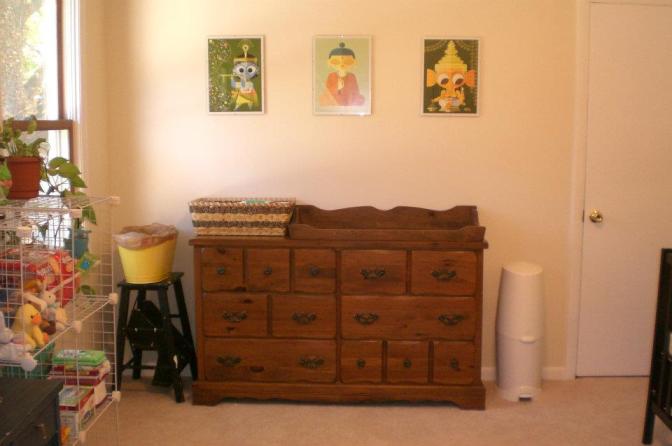 The yoga-related and best thing in this picture is, of course, the art on the wall. Adorable Krishna, Buddha, and Ganesha! Color and detail and lots for baby to look at! Perfectly positioned over the changing table to help keep Mommy calm during 2 AM diaper changes! Here’s a photo of just the art: 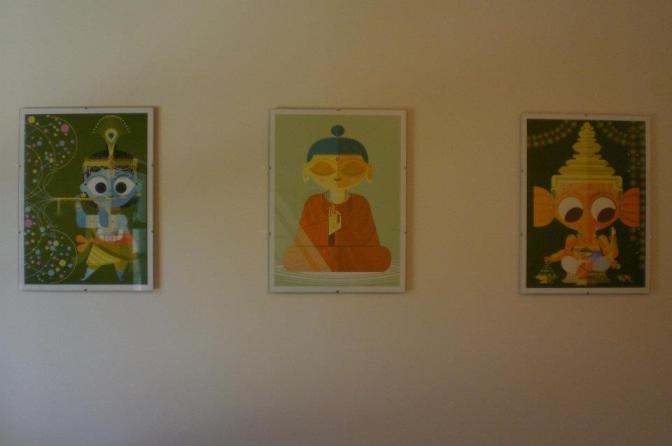 These wonderful prints are from The Big Poster Book of Hindu Deities by Sanjay Patel. The collection includes 12 prints, so I can swap in other deities as YogaBaby grows. It makes me so happy to have these guys up on the wall for my little one.

Wait a minute, you may be thinking. You come to this blog for yoga, and here is a book with a picture of a dragon on the cover. Now, many of you may not know this, dear readers, but I have loved fantasy novels for far longer than I’ve loved yoga. Being so far along in my pregnancy, I haven’t felt up for reading much nonfiction or anything that feels like a “serious” book – I wanted fun, light reading. It seemed like a good time to revisit some of my favorite fantasy novels. And when something in a fantasy novel jives with my yoga, I can’t help getting all bubbly about it.

The Farthest Shore is the third novel in Le Guin’s Earthsea cycle. It was first published in 1972, and it’s about (roughly) a wizard and a young man taking a journey to figure out what’s going wrong with magic, what darkness is coming across people’s hearts. There are sorcerers and dragons and at least one sword fight, but the thing about Ursula Le Guin is that she doesn’t just write about sorcerers and dragons (or about rocket ships and aliens in her science fiction novels) – she uses these concepts to look at what’s going on in the world, what it means to be a human being. The Earthsea books in particular are ostensibly about wizards and magic but really deal with deeper ideas about life and death that are very powerful.

I’ve read The Farthest Shore before and so I knew it had these life/death themes, but on this read I found even more to love. What struck me most is that our hero, the wizard Ged, is totally a karma yogi! On several occasions, he talks to his companion Arren about what it means to be a man of action, and how the best path is to take no action at all. In particular, their conversation after Ged rescues Arren from slave traders is interesting: Ged talks about maintaining balance, acting with responsibility. He says, “It is much easier for men to act than to refrain from acting…. do nothing because it is righteous or praiseworthy or noble to do so; do nothing because it seems good to do so; do only that which you must do and which you cannot do in any other way” (67). This could have come right out of the Bhagavad Gita! I wonder if that’s what LeGuin was reading in the early 1970s? And Ged backs up his statements about action in the way he lives. He goes on this journey only because he must; none of the other wizards will acknowledge the problem or understand what’s needed to solve it. His action is needful to preserve balance in the world. In this and in other books in the series, he only uses magic when it’s necessary, and magic is shown over and over again to have serious consequences when its use is out of balance. I loved finding Ged to be even wiser than I’d remembered him, and I loved finding karma and dragons in the same book.

I found Cope’s approach to this book pretty fascinating. He began writing the book with the intention of writing a traditional commentary on Patanjali’s Yoga Sutras, and he completed exhaustive research into yoga philosophy and Sanskrit with this in mind; however, the focus of the project morphed and shifted as he wrote. The final book includes three intertwining components: commentary and explanation of the yoga sutras, explication of the sutras from a modern psychological perspective based on Cope’s experience as a psychotherapist, and a semi-fictionalized/loosely memoirish account of the yoga explorations of Cope and five of his friends during the years Cope was working on the book.

The book benefits immensely from Cope’s philosophical and spiritual research without becoming too esoteric for the beginner. Cope discusses key concepts from Patanjali, such as the steps of the eightfold path, in an accessible way; he also relates some of Patanjali’s teachings on meditation and the mind to similar teachings in Buddhism, which I was really intrigued by and hadn’t seen elsewhere.

Cope’s perspective as a psychotherapist helps to elucidate for the modern reader why this yoga stuff actually works and what it does to our minds. I personally found the psychological verbiage to be a little heavy and technical for my taste, so I didn’t spend a lot of time dissecting and digesting it, but I still found those passages to be interesting and informative even at a casual reading pace and level.

What really kept me moving through the text were the stories of Cope and his friends. Cope would describe one person’s particular struggle – overeating, a lying habit, a lifelong conflict with a family member – then use that almost as a case study to discuss what, yogically and psychologically, was going on for that person, and show how yoga and meditation could help. Cope includes conversations among the friends as well, as they help one another work through their various issues. Each character makes progress on a spiritual path throughout the book, each in his or her own way, including the character of Cope himself as he struggles with the book he’s writing.

Wanting to know what happened next for the characters kept me moving through the spiritual and philosophical material, some of which was very familiar to me, and the more technical psychological stuff, so I found the framework to be a useful and interesting way of organizing the book. Overall I really enjoyed the book’s unique approach and would recommend it, particularly to those who want to explore the ancient philosophy of yoga and the mind from a modern perspective.

Here’s a simple yoga routine that incorporates the most helpful postures for pregnant women to do. This routine will take about 15-20 minutes if you give yourself time to linger in the poses that feel good. After losing my yoga mojo for a while, I did variations on this sequence three days in a row last week, and my body is feeling more like MY body than it has in a while. I also found this routine to be short enough and gentle enough to be invigorating rather than draining (which is how my former yoga practices all feel lately).

Today I’m loving this post from Flintland: Hey, Fat Girl. I have some things to say about it, but you should read it first before you hear my thoughts. Don’t worry, it’s short. Go click on the link, I’ll wait.

So, I love how the writer has a completely different way of looking at the larger runner than what we typically see in our culture. I love his warm, encouraging, and supportive tone. I love how, throughout the post, he mentions several benefits of being a runner, but nowhere does he mention weight loss – only health, strength, and confidence. Yes! I hope that all the larger runners, walkers, and other kinds of exercisers out there see this post and learn that the jerks who heckle you are only a small minority. Plenty of us are cheering you on.

From a yoga perspective, this is the attitude I want to share with my future students. Yoga is hard: it takes strength and stamina and flexibility and concentration. But, like running, that doesn’t mean you shouldn’t do it. It means, start now, and a month or six months or two years from now, look back and be proud of how far you’ve come and what you’ve achieved. I want to fill my yoga classes with all kinds of people, all different sizes and abilities. Yoga is not about size, and it’s not about judgment. Like running, yoga is a path to becoming your best, strongest, truest self.